After a busy 2017, apologies for the lack of content, 2018 is going to be even busier, with Moulin Yarns appearing at regular monthly craft fairs in Aberfeldy and Dundee, there are also special Yarn events, The first Aberdeen Yarn Fest on May 13th, and Loch Ness Knit Fest in Inverness in October. We have also been accepted for the Perthshire Creates Summer Design Market in Perth on June 23rd.

All this means a lot of work preparing for these events. Below are some of the yarns which have been dyed in readiness, the top three are on the theme of British Butterflies with, from left to right, Adonis Blue, Orange Tip and Small Tortoiseshell. 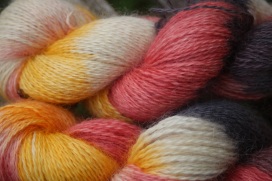 Another major change took place at the end of March with early retirement from my full time job which should allow more time to keep on top of all that is happening for Moulin Yarns, and hopefully the online shop will not be far away.

Until next month, keep a watch on  Facebook for other updates and events.

July is almost over and with it the Tour de Fleece, a ‘Spinalong’ event that spinners participate in along with the Tour de France. The idea is to spin some yarn every day of the Tour de France with some special days when the cyclists are doing time trials when spinners will try something new or different.

I wasn’t able to spin every day but did experiment with some beaded yarn which i quite like and may weave with what I produced. Except a colleague at work bought it, (BOO) but I got some cash for it (YAY). Still, I can always make some more. It  was based on the Hebridean Sea handspun, but it was a single of the merino and lace plyed with a silk and stainless steel thread, threaded with small beads.

The Hebridean Sea on its own has proved to be quite a popular colourway.

Other spinning completed during the Tour de Fleece is this mix of heather and bracken colours that is reminiscent of Moulin Moor around August and September.

At this months Dundee Ministry of Craft I met a work colleague who is keen to learn spinning and already has a wheel. I gave them a shot on my wheel to see how they got on and I have arranged to try and teach them at weekends when there are no craft fairs to go to. That will probably appear in the blog later on, if all goes to plan.

I have been attending craft fairs on a fairly regular basis. Mostly local events to me, in highland Perthshire. Pitlochry, Aberfeldy and Dunkeld. The farthest I have travelled to take part in a craft fair is Dundee and Auchtermuchty in fife.

The majority of events are local and low key events although they are usually well organised.

The monthly Craft Fair in Aberfeldy is held on the first sunday of the month in the Birks Cinema at the same time as the farmers market in aberfeldy square and has a range of crafts on show. 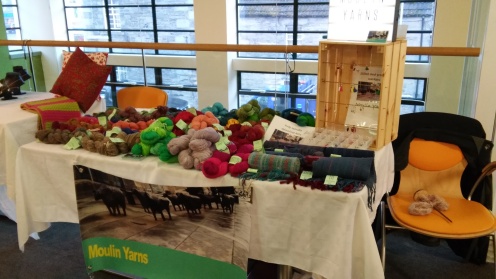 The Dundee Ministry of Craft is held on the last Saturday of the month in the Steeple beside the Overgate Centre. The location in the centre of Dundee beside a large shopping centre should guarantee a reasonable footfall, and it has certainly been worth selling at. 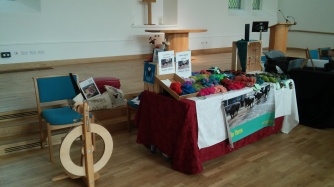 A Christmas fair held in the Atholl Arms hotel in Dunkeld has given me the chance to target a different audience, and an Easter Fair at a large country estate near Auchtermuchty spread the area covered slightly wider into Fife.

However, the best event I attended was in Perth and was specifically targeted at yarn enthusiasts. The Perth Festival of Yarn took place for the first time in October of 2016 at the Salutation Hotel in Perth. 16 vendors, all selling wool or similar products, had a successful day. so much so that this year’s event, on the 10th of September has grown to 60 vendors and has taken over the whole of the Dewar’s Centre on Perth.

The first Perth festival of Yarn was busy, and hectic, so much so, that I found it difficult to keep track of sales as they happened, it was only afterwards that I was able to check what had sold. With this years event having almost four times as many vendors it is promising to be amazing, and hopefully four times as busy, well, who knows?

In the meantime, I will be at Aberfeldy Birks Cinema every first Sunday of the month.

Hello cyberworld, this is my first entry into the world of blogging.

Moulin Yarns is a hobby that grew out of a request from my wife, so it’s really not my fault, to find a hobby which I could do in the evenings while watching the television. As my wife, Linda, knits I accompanied her to a craft shop where she was buying knitting supplies and I saw a notice for a class in weaving on a Rigid Heddle Loom. I thought it sounded interesting so booked myself on the course I enjoyed it and got myself my own rigid heddle loom and started weaving scarves. So far so good, weaving is something I can do in the evenings while watching television.

A while later, at one of the big knitting shows at Harrogate there was a man demonstrating a spinning tool called the Bogway Spinner. Imagine an old fashioned football rattle, that he was spinning wool with. I bought one and started spinning, badly!

After a bit of practice I was able to produce small amounts of yarn, then Linda bought me a drop spindle and I improved enough to be able to spin consistent yarn, but still only in small quantities. that prompted me to think about a spinning wheel. Well, being the kind of guy that checks things before buying I did my research and decided on the wheel I wanted, but what if I wasn’t any good at spinning using a wheel, I had never tried. So, in February 2016 I went to Wingham Wool Works in Wentwort, South Yorkshire for a 2 day ‘learn to spin’ course and, yes, I came home with my wheel. A Kromski Fantasia spinning wheel, and the rest, as they say, is history. Moulin Yarns was born.

Now I can spin a 100g skein of plied wool over the course of a week in the evenings while watching television, like this lovely autumn coloured yarn. 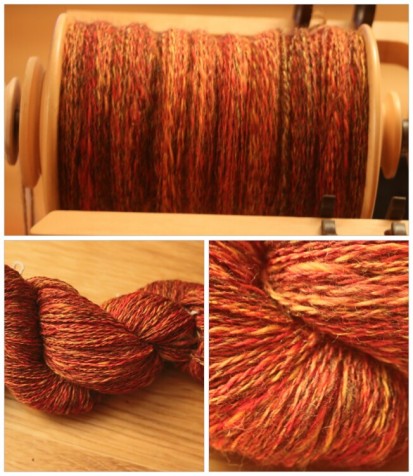 You can find out more and follow Moulin Yarns at https://www.facebook.com/MoulinYarns/

If you are interested in buying from Moulin Yarns I will list events that Moulin Yarns will be attending, in the meantime please visit my shop. https://folksy.com/shops/MoulinYarns